The first week of July started off on a musical note with Ranjani Sivakumar, a Carnatic vocalist, spending four days at Shibumi conducting a music workshop. 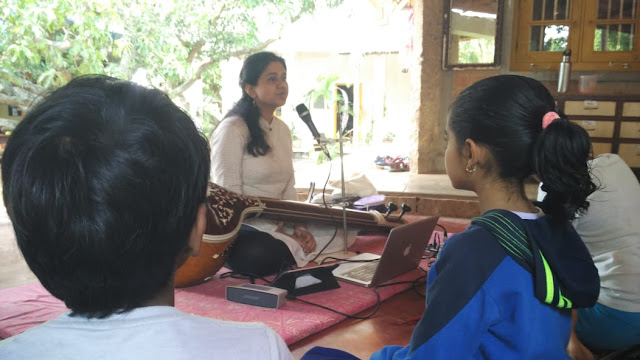 The children huddled around Ranjini and enjoyed the sessions with her. She would bring our attention to listening by patiently tuning the tanpura at the start of the session. Asking the children to listen and participate by telling her if the notes of the string sounded lower or higher. This naturally lead to conversations and questions about the instrument, the tension in the string and sounds that are soothing.

For most part of the session we were learning the Sarali varisai, the fundamental sequences. This allowed us to get a feel for the melody and the rhythm. The sequences follow a logical order - ascending and descending, up to the 7th varisai. We learnt with her the first three patterns and sang them at different speeds. 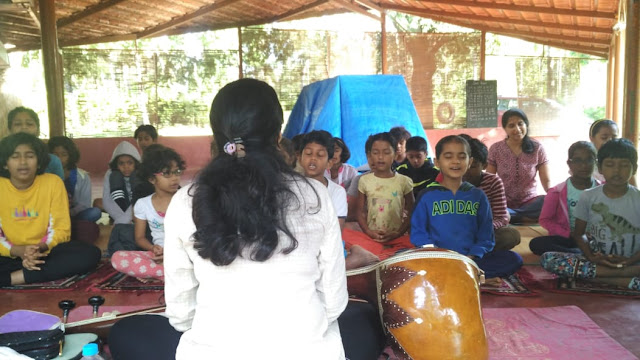 She had a playful way with the younger children (Lalit and Todi groups), when understanding the ' ta ki da' rhythm , we went into the TT room bounced the ball in that rhythm, walked in the rhythm, while one group was keeping the beat another group made movements to the rhythm. The sessions were highly participatory as the children started to identify rhythm in music and everyday things around them; the Ta-ki-ta of the bouncing ball, the Ta-ka-dhi-mi of a slowly walking cow, the Ta-ki-ta of the hammering in the carpentry shed, the rhythm hidden in words, names and more. 'Shi-bu-mi' , ‘Na-chi-ket’. The songs she taught them were 'Shakti Sahita’, 'Rama Janardhan'.

Together with the older children (Malhar and Bihag groups) Ranjani probed into the many aspects of music through pitch, rhythm, tune and lyrics. She also helped them find the same in many of their favourite tunes. How thrilled they were to discover, for instance, a Ta-ka-dhi-mi in a 'Ajab tera kanoon dekha Khudaya’ or even a 'Why this Kolaveri di’, just as easily evident as it was in a song she taught; 'Aananda kandha Gopala, Govinda’! They learnt another song in the Ta-ki-ta rhythm 'Santatam paahimam’

They also explored how the design of each string instrument can make one so different from another. She showed how a tanpura could be tuned to play only two notes, unlike other string instruments with 'frets' would allow for exploration of multiple other notes. One observed that even those children who usually hesitated to sing along, joined in almost immediately during these sessions.

This was the first in a series of music workshops that she will be conducting at Shibumi. The next one will be in August. In the interim, we are keeping music alive by practicing the songs that were learnt. The younger ones are also engaged in their major assignment before the next session: to design their own simple musical instruments using things around them.

Music and rain have become a part of the daily rhythm at Shibumi these days!

Popular posts from this blog

When to rhyme was a crime: A week of poetic madness at Shibumi

September 11, 2015
It always thrills me when I get a chance to work with poetry. As an avid fan of stories and prose, poetry came to me much later in life and since then I've been hooked. So, when Shibumi suggested I work with the children on poetry, I grabbed the chance.
My first task was to dispel all common notions that a poem has to rhyme. We attacked haiku with a vengeance in the Kiri and Thulir group. By giving them a simple formula, and some examples, they were soon spouting haikus about stones, puppies, mice, and even about people. Their young minds grabbed the chance to step out of the structures of a poem, and the imagery they captured in three simple lines was fantastic. As Sarayu said, "I love haiku because it's infinite. Anything is possible." Of course, we had to trim and tweak some of the 'poems' which irked our budding poets, but they eventually succumbed to some edits here and there in their masterpieces. We also sketched and doodled about existing poems and h…
3 comments
Read more

March 03, 2018
When news that the olive ridley turtles had started to nest in the beaches of Chennai reached us, at the beginning of last week, we quickly put together a plan for our visit. Tickets were booked and calls were made to our friends at The School for a place to rest, Tholkappia Poonga for a visit and to our friends at SSTCN (Chennai Students’ Sea Turtle Conservation Network) for the overnight walk to watch the nesting. We set off on a Friday morning reaching Chennai by noon. After a quick lunch, we visited the Tholkappia Poonga.
Tholkappia Poonga is an ecological park in the Adyar estuary area. It is an amazing example of restoration of freshwater eco-systems in the heart of a city! We were introduced to the history, the restoration process and the flora and fauna found in the park by Mrs.Gomati. Her energy, passion for ecological restoration, and determination to carry forward the good work shone through in her interactions with us. We recommend it as a must see place for people visiti…
2 comments
Read more

August 18, 2019
On an excursion to Rajasthan last year , we lived in the family house of two of our students. We heard many stories about the family and decided to shoot one story we had heard.

It was one amazing day of borrowing clothes, dressing up, capturing the streets and the joy of telling a story together.